Bukit Brown Municipal Cemetery and Kopi Sua cemetery are in fact two different cemeteries, with Bukit Brown being the older, having been in use from 1872. It comprises of the Seh Ong (also called Tai Yuan Shan), Gan Eng Seng and Lau Sua Cemeteries. These cemeteries were used specifically by the Hokkiens. Bukit Brown cemetery would encompass the area from Lornie Road, Kheam Hock Road and Lorong Halwa. The other cemetery, Kopi Sua, is also a Hokkien cemetery and was onced owned by the Hokkien Huay Kuan (a clan association or Kongsi). It now belongs to the Government through the Land Acquisition Act. This cemetery stretches from Mt Pleasant Rd to the Pan Island Expressway (PIE) with Onret Rd running through its parameter.

There are an estimated 100,000 graves in total in this 173 acres of land that makes up Bukit Brown Municipal Cemetery. (i excluded the rest of the cemetery area which we nickname as "Greater Bukit Brown" which is estimated to add up to 392.4 acres )

Bukit Brown got its named from a plantation owner, Mr. George Henry Brown, a shipowner, trader who came to Singapore in the 1840's and prospered, bought the land that later became his namesake and made his residence nearby where Mount Pleasant is. His foray into nutmeg and coffee plantation did not seem to do well. He experienced other misfortunes such as the accidental drowning of his son and finally a machinery incident which resulted in the lost of his arm and after his death in Penang, his estate was eventually sold off. George Henry Brown land was eventually sold off but the name Bukit Brown stuck on.


The name where Bukit Brown Cemetery is traced back to Wee Hee and changed several hands before it was bought over by 3 "brothers" or clansman from the Ong Clan - Ong Ewe Hai, Ong Chong Chew and Ong Kwee Ho, wealthy Hokkien businessmen who originally plan for it to be a village where poor members from the Ong clan can take root and live. Some did, but eventually it became a cemetery for the Seh Ong Kongsi (or Hokkien clan association for people with the surname Ong).

To meet the growing demand for a burial ground for the growing Chinese communities (with more "sinkehs" or Chinese immigrants coming to this region) as well as to better coordinate the number of burial sites (as there was uncontrolled mushrooming of Chinese burial grounds all over), the colonial authorities worked with the Municipal Council and acquired a portion of this land. It became a municipal cemetery for all Chinese in 1922, whether rich or poor. (hence there are sections called the Pauper sections). In November 1946, an article notifying all the Bukit Brown is to be closed for burials (i.e. no longer accepting burials except for those in reserved plots). The final burial was in 1973.

Getting there and what to bring

If you are walking on this huge grounds, do remember to bring water, mosquito repellent and umbrella/poncho. The mosquito's there are vicious and it can get quite humid on certain days there so remember to hydrate ! If you intend to go off the tar road and do some grave spotting, a good pair of shoes and long pants are highly recommended as well.

A group of dedicated individuals have been grouping together to rediscover the graves there and most importantly share it with the rest of us. Groups that have been actively promoting the heritage of this place are the Singapore Heritage Society, Nature Society, Heritage Singapore Bukit Brown Facebook group and individuals such as Raymond & Charles Goh. What i am sharing here will not be possible without insights and leads from this group and individuals that sparked my own interest to research further.

The tombs provide glimpse of the works of Artisans that made the tombs here unique to this region.
Sikh Guards of Bukit Brown
Art deco tomb of Lee Kim Soo 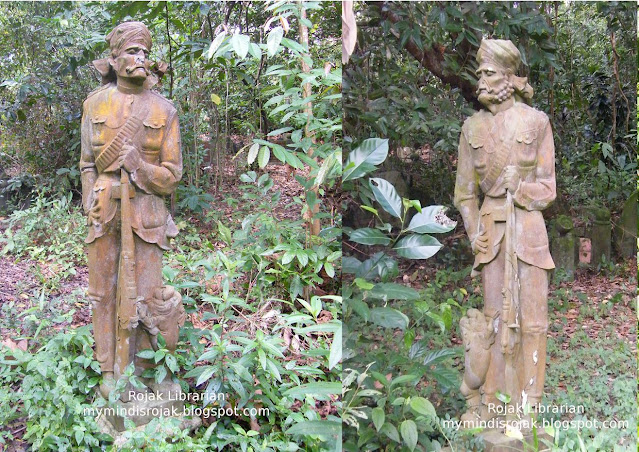 The area has remained untouched for more than 30 years, the last burial being in 1973, when this municipal cemetery was closed and no further burial allowed. Wildlife and trees were allowed to literally "go wild" and birds make a come back or use this area as a resting point or stepping stone to other green lungs around. The Nature Society, Singapore have been organising nature and birding walks here and it is through them where i first took note of this wonderful place.

Future and Fate of Bukit Brown

A slew of activities and public concern and outcry happened after LTA/URA announced that a road will be built and that it cuts across Bukit Brown in Sept, 2011. Heritage and nature lovers banded together to try to safe the last largest and oldest cemetery from development. The press coverage and forum letters for Bukit Brown was overwhelming as well, with more people taking note of the historical significance of this place and the many, many pioneers that contributed to initial nation building years were interned here.

A symposium jointly organised by the Singapore Heritage Society & NUS Southeast Asian Studies to highlight the plight of this place was held on Nov 19, 2011 and was well attended with the entire auditorium filled to capacity. I was one of the lucky few that managed to get seats and i learned a lot from it as well with insights and perspectives from Heritage, Nature and Anthropological experts. .

Of interesting note as well, National Archives as of end November, made available online the Burial Registers of the people buried at BB from 1922 -1972 (the time when it was a municipal cemetery open to public burials).For researchers and amateur historians, it opens up some primary data of the people buried there. In fact, while i was browsing the records, i myself discovered that there were Malays buried that during the Japanese occupation and from the remarks column, they were buried together in a common grave/trench.

The tombs in Lao Sua or Greater Bukit Brown are part of the guided walks we started to raise awareness of its rich heritage and flora and fauna. Lao Sua is another large area of historical significance managed by the Hokkien Huay Kuan but subsequently sold to the Government under the land reclamation act for future development. First established after the old Tiong Bahru Cemetery was full, it was through the efforts of pioneers like Gan Eng Seng, Tan Beng Swee, Chia Ann Siang who donated money to create this cemetery cluster for purpose of burial of their immediate family and also other Chinese of the Hokkien dialect.

The stories are continuing to evolve, so do bear with the possible mistakes (if any) during the writing process of the stories. With more people in the community with better insights, i am sure more can rediscovered and the stories of the long forgotten past remembered again and piece back together bit by bit.