November 12, 2021 Block 3 Div D Bukit Brown Hill 3
Yap Oh Poot is the proprietor of Chop Heap Hoe, Furniture Dealers Victoria Street. His partner was Mr. Chua Kwee Siew who married one of Mr Yap's daughter, Miss Yap Chwee Yee. Yap Oh Poot together with Wee Teow Beng was once the joint proprietor of The Arcadia, Cinematograph Theatre at East Coast Road until he sold his portion on ownership to Wee Teow Beng in 1920.
Yap Oh Poot passed away at the age of 61 at his residence, 224, Victoria Street, on 6 January 1934. He leaves behind a widow, 3 sons (Yap Soo Leong, Yap Guan Teck, Yap Guan Hoe), two daughters (Yap Chwee Yen, Yap Chwee Ngoh), a son-in-law, two daughters-in-law and many grandchildren
Madam Tan Siew Lian Neo (Tan Siew Lean Neo) passed away at the age of 53 on 7 August 1936. at 224 Victoria Street. She leaves behind 3 sons, Yap Soo Leong, Yap Guan Teck and Yap Guan Hoe, 1 daughter, Yap Chwee Ngoh,  1 son-in-law, Mr. Chua Kwee Siew, 2 daughters-in-law and 9 grandchildren.
Yap Oh Poot had property around Victoria Street area which were sold after his death. After his death there was also a writ of distress from the landlord of 220 Victoria Street against Chop Heap Hoe and the furniture and other stocks were sold. What happened to Chop Heap Hoe after Yap Oh Poot passed away ? 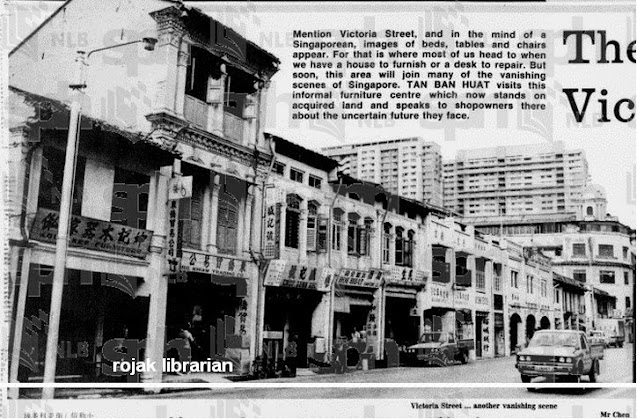 Chua Kwee Siew, partner of Chop Heap Hoe, Furniture Dealers, Victoria Street passed away at the General Hospital on March 10, 1939. He is survived by his wife, 3 sons and 2 daughters to mourn his loss.