November 10, 2021 Block 1 Division E Bukit Brown Hill 1
There was an article mentioning Mr. Soh Hock Chiang entertaining his friends to a evening party at his residence at Ann Siang Hill to celebrate and witness the discarding of his queue. It the same article, it was mentioned that Soh Hock Chiang married one the paternal granddaughters of the late Chia Ann Siang.

Soh Hock Chiang is the founder and hon. secretary of "Hoh Ann Kok Association" of which Mr. Seow Ewe Lin, head shroff of the Deutsch-Asiatische Bank is the president. In recognition of the years of service rendered by Soh Hock Chiang to the Association, its members presented him with many articles, among which is a gold scarf-pin set with diamonds.

The executor of the late Mr. Soh Hock Chiang estate of No 63, Bukit Timah Road was granted to Madam Chia Chye Seck Neo. An interesting thing was the article mentions that Soh Hock Chiang died (intestate) on 2 July 1924. However from his tomb and burial records, he actually passed away 2 April 1924. 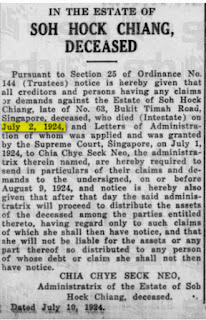 In 1909 there was mentioned of a chinese towkay by the name of Soh Hock Cheang who was run into and injured by a gharry driven by a Boyanese in Orchard. His injuries necessitated his removal to his home on Ann Siang Hill and Dr. Galloway attended him.